During a brief moment of procrastination earlier this evening, I came across a question one of my dear friends posted on Facebook. The gist? She wanted feedback from other mothers about how many Christmas gifts they give their children over the holidays.

How many is too many? How few is too few? The question resonated with me because I feel like this is something most modern moms struggle with at some point.

I know my husband and I tend to go overboard every year, and then we always end up regretting it. For one thing, half of the gifts we get our kids wind up buried in a toy box or cast aside after being played with a handful of times. And then there is the more problematic issue of entitlement — we don’t want to raise children who come to expect being showered with more gifts each passing year.

See that? Nope. I want no part of that in my household. I mean, does anyone? Heck, it would be super if kids didn’t expect gifts at all. How about the joy of the season, children? That’s your gift. Ha! Alas, somehow I don’t think that would fly, at least not at this age.

So what’s the secret formula? Is there a magical number of presents that straddles the line perfectly? Of course not, sillies. Nothing about parenting is absolute. In fact, it’s generally just a big ol’ circus, and we’re trying (and often failing) to be the ringmasters.

However, I saw several responses I really loved from other moms on this particular Facebook thread I was peeping.

Several mothers chimed in that they go by a three-gift rule in remembrance of the three gifts Jesus received from the Wise Men. Most of these moms said those three gifts typically constitute a want, a need, and either a surprise or a spiritual need. What a lovely idea, right?

I think the right fit for our family — and the one we are totally hijacking this year — is one shared by my friend Tiffany, who has three precious little boys.

We do four things per child:

I adore this idea because it really touches on the broader categories we try to stick to for our kids anyway. Narrowing things down like this while the kids are still so young will hopefully help it stick.

Tonight, when I explained the idea to my 5-year-old daughter, Marlow, her response proved to be a simple (and much-needed) reminder that children are inherently good. Their little hearts are capable of far greater things than we often give them credit for.

“Well, Mama, I don’t actually need anything,” she said to me. “I already have lots of toys. Maybe you could take my ‘need’ and give it to someone else.”

Oh be still, my heart!

*UPDATE: After posting this, two things were brought to my attention I felt merited sharing as well. First, my sister sent me a Pin that is sort of an expansion on the four-present idea. Unfortunately, the original link to the blog that posted it no longer works, but I’ve linked out the blog home page in case you want to check it out: 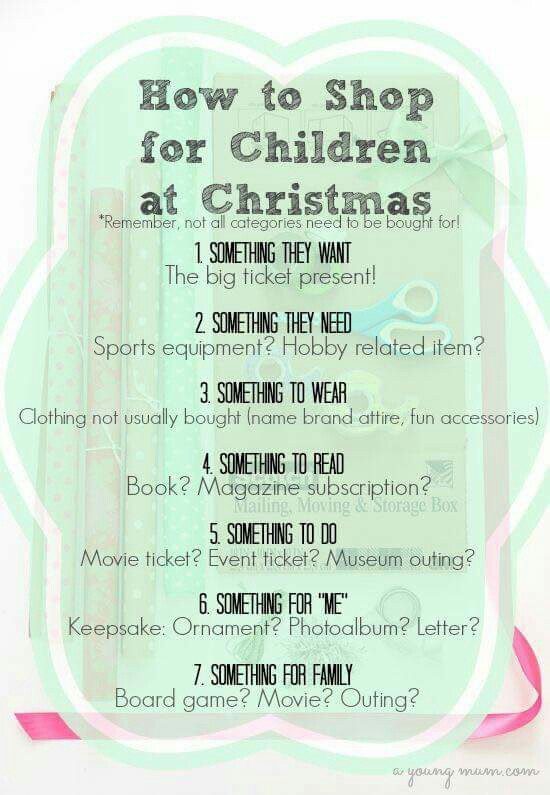 via A Young Mum

Two things immediately jump out at me about this list: the “something for me” and “something for family.” Growing up, my mom bought my brother, sister, and me each a new Christmas ornament every year. By the time we graduated and moved away from home, we had our own beautiful collections to grow with our families one day. Hence, “something for me.”

As for “something for family,” I’m a huge proponent of gifting memberships. To the Aquarium, to the Children’s Museum, for a Park Pass, for a subscription box of some sort — I’m all about the gifts that keep on giving. Which brings me to my next update….

Also in my Facebook feed this morning was a blog post shared by my friend Kristi about why kids shouldn’t get traditional toys for Christmas. The writer, Jama Oliver, echoed what so many parents must feel: we’ve got too much stuff! Every holiday leaves a massive swath of toys in its wake. Time to shake things up, no?

Here are a few of the alternative suggestions she makes for kid-gifting that I think are fantastic: